can you find Dugongs?

What do Dugongs eat? 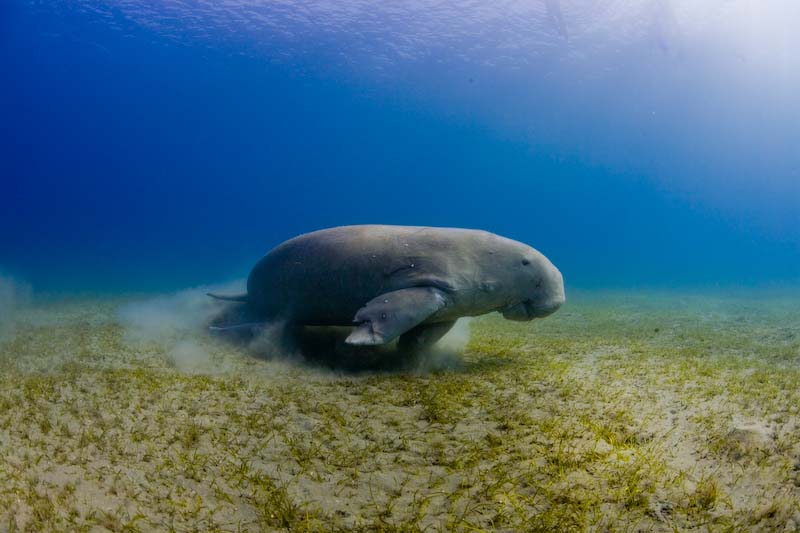 Dugong play an important ecological role in coastal marine ecosystems, and the status of dugong populations in an area can be used as an indicator of general ecosystem health.

The Dugong (Dugong dugon), or sea cows, are marine mammals which can grow to about three metres in length and weigh as much as 400 kilograms.1.

The name sea cow refers to the fact that they graze on seagrass.

As dugongs feed, whole plants are excavated and telltale grazing trails are left behind.

Dugong are more closely related to elephants than to other marine mammals such as whales and dolphins, but their closest living aquatic relatives are the manatees. Manatees are aquatic mammals that live in freshwater rivers and coastal waters of West Africa, the Caribbean, South America and the southern United States (Florida)1.

Dugongs are found from East Africa across to the Solomon Islands, in the waters of more than 40 countries.

Where can you find Dugongs?

Dugongs are globally classed as “Vulnerable to Extinction” by the International Union for Conservation of Nature (IUCN) Red List of Threatened Species, but it is recognised that data are often insufficient for making an accurate status assessment across much of the dugong’s range2.

The largest populations are found in Australia, followed by the United Arab Emirates (UAE), but the range stretches across some 40 countries in tropical and sub-tropical zones where seagrass is abundant. 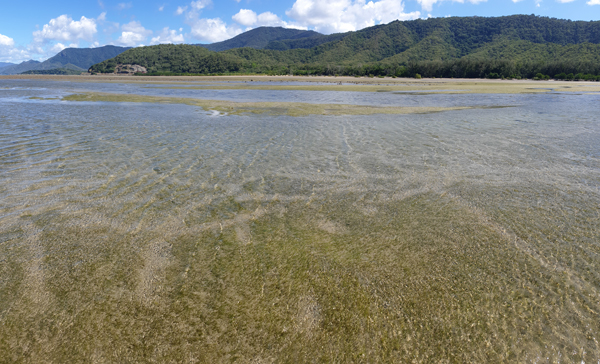 What do Dugongs eat?

Seagrass meadows are a major food source for a number of grazing animals (including Dugongs) and are considered very productive pastures of the sea. An adult dugong eats about 28 to 40 kilograms (wet weight) a day. As dugongs graze on seagrass, whole plants are excavated and grazing trails are left behind.

Although dugongs will feed on any seagrass species within their range, if a range of species is available, they select seagrass species for food which are high nitrogen, high starch and low fibre.

Dugongs are globally classed as “Vulnerable to Extinction” by the International Union for Conservation of Nature (IUCN) Red List of Threatened Species.

The close association between dugongs and seagrass is likely to have contributed to their status as an endangered species in some parts of the world. As dugongs must often come near to the shore to graze, they are left vulnerable to unfavourable human interactions, including death or injury from vessel strikes. In developed countries, the key threat is often degradation and loss of habitat through coastal development with its associated dredging and pollution, as well as incidental catch by gill net fisheries and damage to seagrass from fishing by trawling.

The situation differs in developing nations: in some areas, dugong hunting still takes place even when it is illegal and a dugong can represent a valuable catch to be sold or to provide protein for communities struggling with insufficient food resources. Incidental catch in artisanal fisheries is another negative impact. Dugongs are often worth more dead than alive, and accidentally catching a dugong in a net can represent a windfall of meat (and money) for a fisher and their family. As the majority of dugong range states are developing nations, effective conservation measures need to take this into account and work the needs of the local population to achieve results2.

tapered body that ends in a deeply notched tail, or fluke

usually observed singly or as pairs. Herds of 12–300 are sometimes seen, with 670 being the maximum recorded

one calf every 3 to 7 years
12-month gestation

about 10 years of age 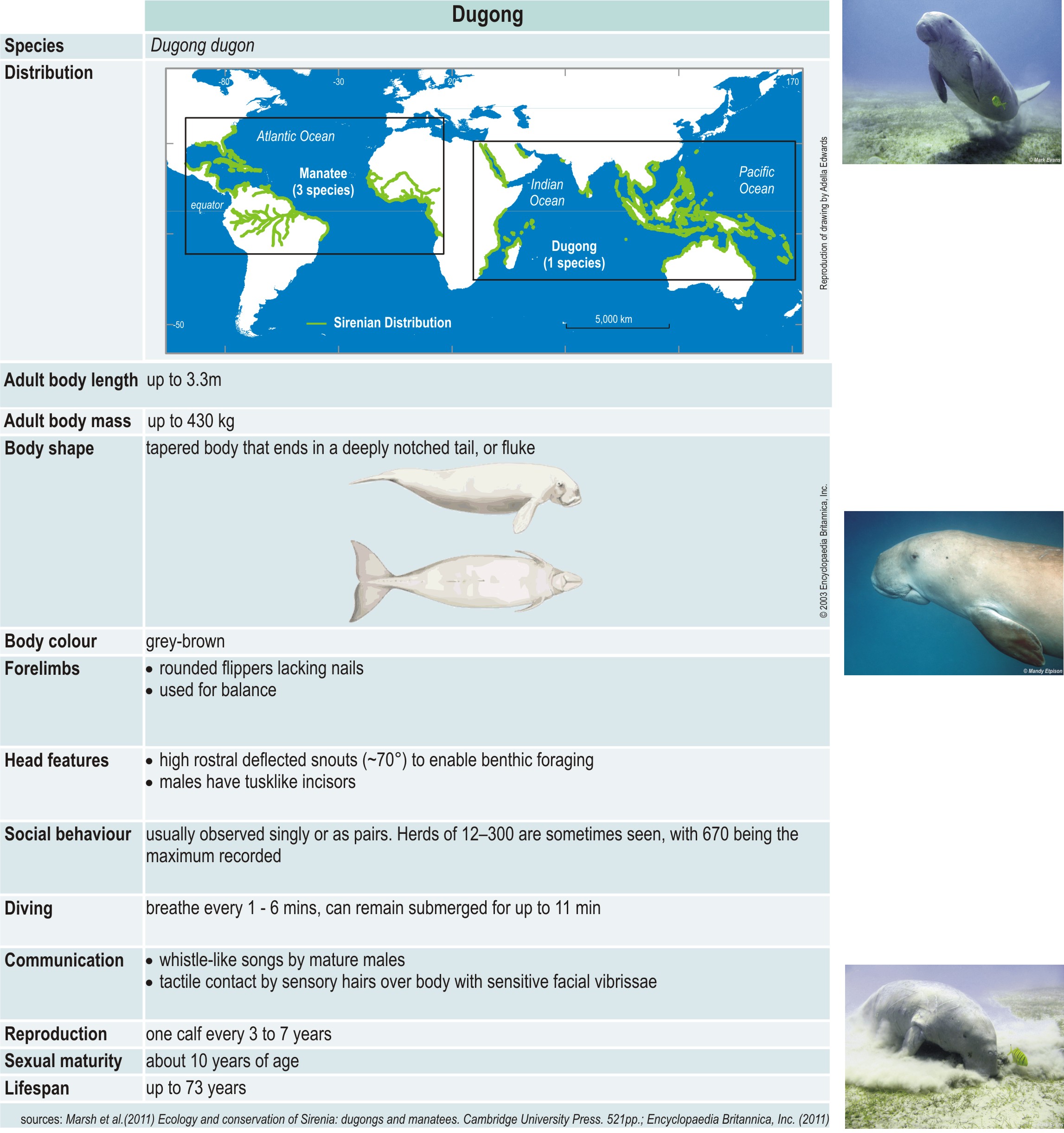 Sharing science and culture in Yanyuwa saltwater country. Li-Anthawirriyarra Sea Rangers join forces with marine researchers to catch and study dugongs in the Gulf of Carpentaria. A short film by Sam Frederick for li-Anthawirriyarra Rangers and Marine Scientists at DENR, NT

Ecology and Conservation of Sirenia: Dugongs and Manatees 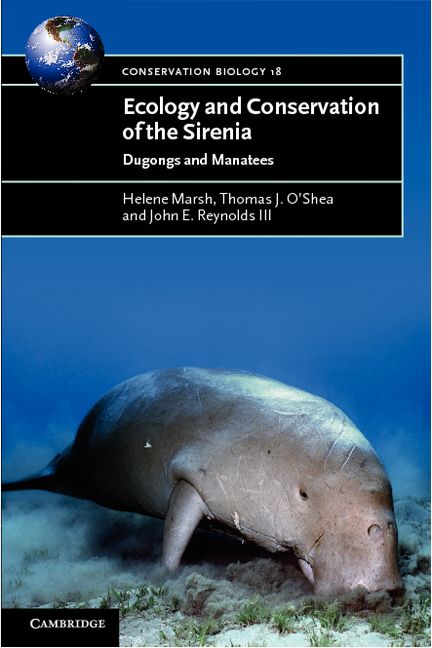 Ecology and Conservation of Sirenia

Dugongs and manatees, the only fully aquatic herbivorous mammals, live in the coastal waters, rivers and lakes of more than 80 subtropical and tropical countries. Symbols of fierce conservation battles, sirenian populations are threatened by multiple global problems. Providing comparative information on all four surviving species, this book synthesises the ecological and related knowledge pertinent to understanding the biology and conservation of the sirenia. It presents detailed scientific summaries, covering sirenian feeding biology; reproduction and population dynamics; behavioural ecology; habitat requirements and threats to their continued existence. Outlining the current conservation status of the sirenian taxa, this unique study will equip researchers and professionals with the scientific knowledge required to develop proactive, precautionary and achievable strategies to conserve dugongs and manatees.

Ecology and Conservation of Sirenia: Dugongs and Manatees

Ecology and Conservation of Sirenia

Dugongs and manatees, the only fully aquatic herbivorous mammals, live in the coastal waters, rivers and lakes of more than 80 subtropical and tropical countries, this book synthesises the ecological and related knowledge pertinent to understanding the biology and conservation of the sirenia.